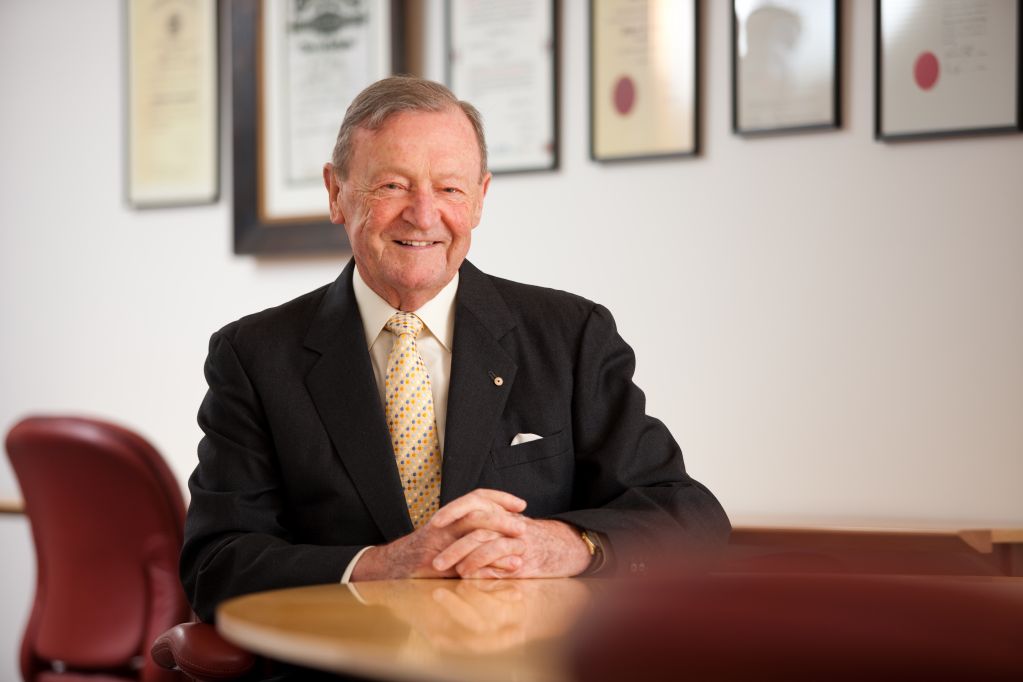 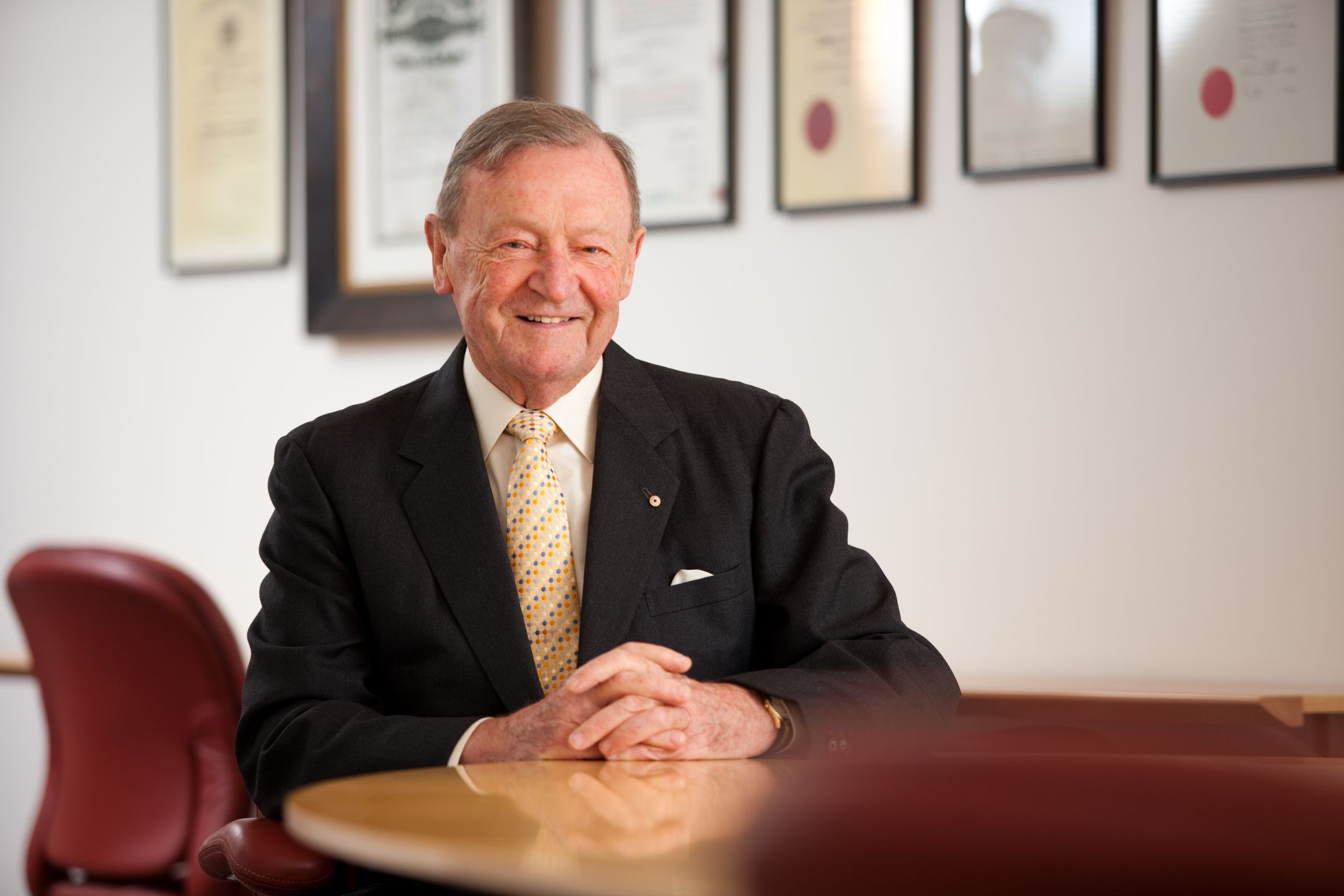 The Governors and staff of the Foundation pay tribute to the life of Mr John Gough, who died on 24 July 2015.

Given by Charles Goode

John was a family man, a successful businessman with an international perspective, a person who enjoyed travel, a keen golfer, and a follower of the Melbourne Football Club.

His business life was 'Pacific Dunlop' and Philip [Brass] has covered that very important part of John’s life.

John and I first met around 1980 when Potter Partners and John Baillieu and Clive Smith of E.L. & C. Baillieu, were joint advisers to Dunlop Australia (later Pacific Dunlop). We spent many years together as colleagues on a number of company boards - the Pacific Dunlop Board for 12 years; the CSR Board for 5 years; the ANZ Board for 5 years; and the Board of Governors of The Ian Potter Foundation for 18 years.

He became a Director of the ANZ Banking Group and then its Chairman. He was a Director of BHP for 14 years; a Director of ICI, Amcor and CSR; and on the Australian Advisory Boards of General Motors and AT&T.

John joined the ANZ Board in 1986 and when the banks suffered from the 1991/92 property crash resulting in the ANZ actually making a loss, the Board appointed John as its Chairman. It was a difficult time for the Bank and John’s balanced and inclusive manner brought the directors and senior management together. John always maintained that he was not really a banker and when the ANZ was once again on solid ground, he retired; his job having been completed successfully.

John had style; he was a person one looked up to and respected. He had a cultured pitch in his voice, a skill in choosing just the right words, and a sharp mind and wit. He had “gravitas” - not from his height but from his charm. He had a sunny personality; he was always courteous, considerate, calm, and was possessed of an abundance of common sense. John was in every respect a gentleman, in the true sense of the word.

One of John’s great strengths was his power of persuasion, which he used throughout his remarkable career to overcome many problems, without ever having to resort to an abusive or overpowering manner.

John delighted in life and had an enthusiasm for business. I remember once when we were in Singapore meeting with the Chairman of one of Pacific Dunlop’s bankers. On returning to the hotel John observed “that meeting went well; one wouldn’t be ‘dead for quids’.”

John was a Governor of The Ian Potter Foundation for 18 years. He was a humanitarian and interested in how the Foundation could contribute to improving Australia’s society. He was personally involved with many of the areas within which the Foundation made donations.

In Medical Research, John was on the Board of the Walter and Eliza Hall Institute for 20 years and its Vice-President for ten of those years. The Foundation funded the establishment of the Nossal Research Laboratory at the Institute.

In Education, John was one of the Founders of The Melbourne Business School at The University of Melbourne, and on the Board of that institution for over twenty years, including as Chairman for six years. During his time on the Board, the Foundation established The Ian Potter Chair in Finance at the School.

John brought to the deliberations of The Ian Potter Foundation his ideas, his enterprise, insight, acumen and wisdom, and great judgment in assessing proposals. He had the unusual gift of listening; he could sit through a long discussion on some theme, and then gently intervene and offer a useful or an important point that had been overlooked. His kindness and generosity in giving his time made him a favourite with the Foundation’s staff.

John had an engaging and dry sense of humour. When I told him at “Darnlee” – the nursing home where he spent his last month - that it was good to see his own paintings around the room, he said, “yes Rosemary and the girls arranged to have them put up” – and then with an amused smile he added, “it gives them something to do”.

John was a family man and his loving banter with Rosemary and their shared admiration for their children are among my very fond memories of him.

John was always immaculately dressed. He was first a marketing man and then a manufacturer. He was exceptionally observant in small as well as big matters. He always noticed what kind of footwear was on somebody’s feet - and usually the brand name.

He shared his life with you and would give you weekly reports of the progress of his golf game. When he won a golf day at Frankston this was the cause for great excitement – he had a wonderful sense of the occasion.

John was a generous man and always shared and included others in his success. There was not a selfish bone in his body.

His support for the Melbourne Football team demonstrated his loyalty, optimism, patience, and resilience.

John was interested in public policy, politics, and the future of Australia. Parties on both sides of the parliamentary scene sought his counsel and advice, which he gave without fear or favour, and for which he gained their respect and trust. He was a founding director of The Menzies Research Centre. He was of the right wing, although not quite as far right as Rosemary.

John received many honours in his life, an OBE in 1980, an AO in 1990, and a Centenary Medal in 2003. The John Gough Chair in the Practice of International Trade was established by The Melbourne Business School and an Honorary Doctorate of Laws was conferred on him by The University of Melbourne.

John embraced life and did not flinch or miss a step. I remember one time when Cornelia and I travelled with Rosemary and John to a remote village in China. The village leader greeted John with the gift of what he alleged was a 100-year-old egg and invited John to eat it. John gave a great speech of appreciation and said how honoured he was; he then passed the egg to Rosemary to eat.

I hope we will all reflect today on the good times we have enjoyed with John. We are here to celebrate the wonderful life of an exceptional man, our friend, who we will miss greatly and always remember.

Our thoughts are with his much loved and life-long partner, Rosemary, their children Sarah, Stewart and Anna and their wider family.

The Foundation has granted $5 million to the new Creative Industries and Performing Arts Centre (UTAS) in Hobart. topping up State and Federal government funding for this impressive undertaking.