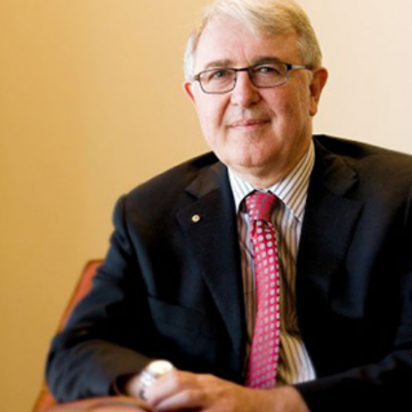 Professor Sir Edward Byrne was appointed to the Foundation's Board of Governors in April 2021. Prior to his appointment, Professor Byrne was the President and Principal of King’s College London, and Chairman of King’s Health Partners from 2014 – 2021. At King’s College, Professor Byrne established a new university mission and vision for 2029 and significantly increased the range of degrees and programmes available to students.  Professor Byrne also founded the King’s Business School and through his work and connections with industry and business, King’s College has grown its global links as well as partnerships within London.

Professor Byrne is a neuroscientist and clinician by background. He qualified in medicine at the University of Tasmania in 1974 and subsequently trained as a neurologist in both Adelaide and London. He is a fellow of the Royal Australasian College of Physicians, the Royal Colleges of Physicians of London and Edinburgh, the American Academy and the American Association of Neurology. He holds the higher degrees of Doctor of Medicine (UTAS) and Doctor of Science (University of Melbourne).

In 2003, he took up responsibility as Executive Dean of Medicine, Nursing and Health Science at Monash University. During this period, research income doubled, Professor Byrne strengthened the School of Biomedical Sciences and supported the establishment of a new Medical School in Malaysia as a branch of Monash. In 2007 he left Australia for London where he held the positions of Executive Dean of the Faculty of Biomedical Sciences, Head of the Medical School and Vice Provost at University College London until 2009.

Professor Byrne has served on a number of Company Boards. He was a non-executive director of Cochlear Pty Ltd for almost 20 years and had served as the Chairman of the company’s Medical Science Committee, as well as on the Nomination and Technology & Innovation Committees.  He was also director of BUPA, a private healthcare insurance provider in the UK and Australia.

He has wide interests in the arts and has written several books of poetry. He is a fellow of the Australian Academy of Technology, Science and Engineering and an honorary fellow of the Australian Academy of Health and Medical Sciences. In 2019, he was also elected as a Fellow of the Academy of Medical Sciences in the UK. He has honorary doctorates from the Universities of Sydney, Monash, Adelaide, Warwick and Western, Ontario and honorary professorships at Warwick, Peking University and UCL Queen Square Institute of Neurology.